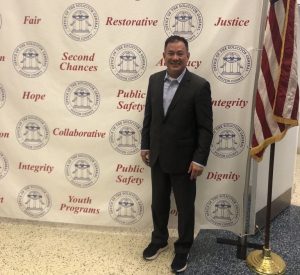 I have spent much of the past 3 decades in a political campaign strategist role and as a second chance advocate, and I enthusiastically applaud the bipartisan justice reform bill that was passed in December 2018 in Washington, DC.

As a winning political campaign strategist, a second chance advocacy expert, a successful justice reform supporter, a connector of people and resources, a champion of faith-based organizations, and a voice of the people, I have long been a bipartisan influence on these issues that affect so many families throughout our nation.

I have aimed to help those that others have given up on, those with labels attached to their names, from all walks of life.

I provide a voice for all backgrounds, as I work to make impactful transformations for people transitioning back into society, as productive citizens in their local communities. I remain passionate, committed, and driven to help others – after all, we have all made mistakes.

I have been pastoring for over 4 decades and had a broadcast radio ministry in North Georgia for 20 years when I became acquainted with Bosco Cole. He has been a constant source of encouragement and counsel in my life for over 30 years now and we have worked together in multiple communities with non-violent offenders who are re-entering society.

He has been involved in faith-based organizations and various civic groups as well, commonly desirous to provide SECOND CHANCE opportunities for those willing to be intentional and proactively committed to establish a new life.

Bosco is a talented and most enthusiastic individual who can formulate a plan of action with alternative sentencing packages. I know there are numerous families around the country that are grateful for his service.

I wish him the best in all that he continues to do as he prepares to launch his innovative reform package, impacting not only his state, but a nation that has waited too long for such a change.”

God bless you for your hard work & commitment to helping others. It was nice to be remembered for the small part I played in your success. Thank you.

I pen this letter in support of Bosco Cole, a brilliant public servant. Mr. Cole was  an invaluable member of my campaign team for Fulton County Solicitor General. It became immediately apparent that Bosco is able to draw from a wealth of contact with people from all walks of life. He was always abreast of current events related to my campaign and had a strategic plan to address every obstacle which was invaluable. Bosco came highly recommended by a national opinion shaper. I highly recommend Mr. Cole for any position he may wish to pursue, as I am certain that he will be a valuable asset to any campaign.

“Bosco, thank you so very much for giving me a second chance. On days that I’m down and out, I just think about you and all the things you did for me, and everything always gets better!” -Sid

“Thank you for all you did for my son. He is growing and learning lessons that will last a lifetime. How he uses it is up to him – all you can do is plant the seed, and for this I thank you.” -Wanda

“You are a remarkable man, Bosco. It’s not many people who make a difference in people’s lives the way you do. You treat others with such respect, kindness and understanding. I know that my son would not be alive today if you had not entered his life when you did. Nothing we did seemed to turn him around. But you offered him a hand, like you do so many others, and pulled him out of his private hell. Thank you for what you have done for him, for the lessons in human understanding you have shown me, and for caring.” -Pam

“Dear Bosco, each Sunday morning the pastors and elders of our church meet to choose someone from outside our congregation as our Prayer Partner of the Week. Our Prayer Partners are often community leaders, other Christian leaders, or someone whose story has touched us and moved us to pray for them. You are our Prayer Partner for this week; please know that our prayers are with you as you help non-violent offenders and help them get on the right track. We pray that God will continue to bless you with compassion and discernment, and that He will allow your vital mission to flourish.” -Barry

“Dear Bosco, I cannot express how much my husband and I appreciate your passion. We are so pleased with the improvements and changes that our son has made in his life. I know that he thinks highly of you and we cannot thank you enough for the help and support you have given him.” -Donna

“TJ, the youngest of my four sons, was brought up to know good from bad, right from wrong and was always a great kid and student. As a teenager, though, he began making some bad choices. Soon his faulty decision-making and poor judgment led to serious consequences with a hefty price tag: his very freedom and the right to govern himself. Mercifully, through God and the help and prayers of many good people, he chose to pick up the pieces and turn his life around. It is a complete change from the inside out and he shines! He is an overcomer, and because of this attitude, he is a valuable member of society. One person stands out, needs to be recognized for his intervention on TJ’s behalf, and is a man who both has and deserves TJ’s respect. That man’s name is Bosco Cole. He exerted a strong, positive influence over my son, and I will always be grateful for his help.” -Dianne

“Hello, Bosco. You accepted me from detention center and helped me when no one else would. I still had some hard lessons to learn, but the time that I spent at the re-entry program really made a difference in my life. I've enjoyed a very favored life since. I want to thank you from the bottom of my heart and let you know that the seeds you have sown so many years ago are still bearing fruit.” -Wes

“I was down and out, spinning my wheels and getting nowhere. Legal problems got me into trouble, and after going to court, found myself serving a 30-day sentence in jail. After a week, I was befriended by a man who, before I was released, gave me a phone number and a name, Bosco Cole. I had severe doubts that anything positive would come out of the name and number I had obtained from an inmate, but a few hours later, still uncertain anyone would come, a man named Bosco picked me up. My life and attitude were revived from that moment on. Bosco bought me some food, enrolled me  in a re- entry center and told me to relax. I was home, safe and secure. He had complete faith and trust in me. I prayed and cried at the same time. God had sent us to each other. Disappointing people close to me was a recurring theme in my life, but no longer. Coincidences do not happen. The old “me” and my ways had died, and a new “me” was born. God Bless you, Bosco.” -Don

@2019. All rights reserved. Web Development by